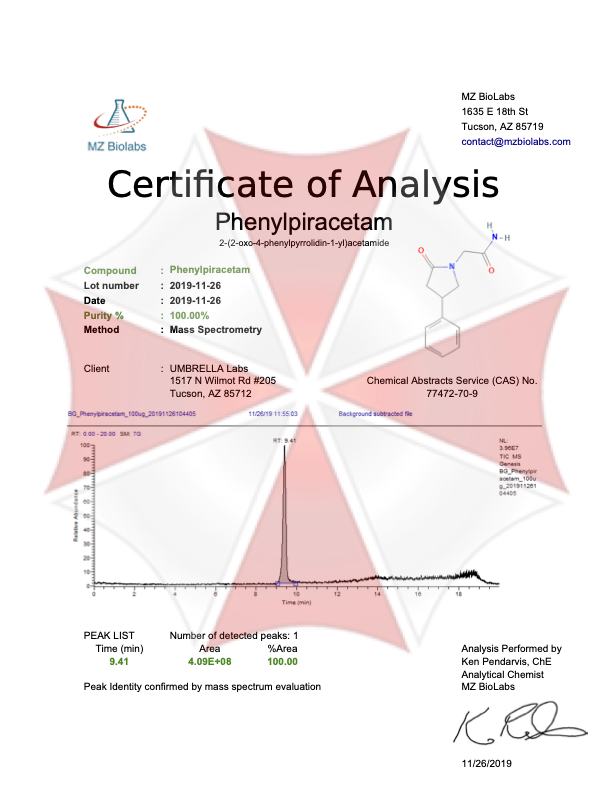 Phenylpiracetam, is a phenylated analog of the drug piracetam. It was developed in 1983 as a medication for Soviet Cosmonauts to treat the prolonged stresses of working in space. Phenylpiracetam was created at the Russian Academy of Sciences Institute of Biomedical Problems in an effort led by psychopharmacologist Valentina Ivanovna Akhapkina. In Russia it is now available as a prescription drug. Research on animals has indicated that phenylpiracetam may have anti-amnesic, antidepressant, anticonvulsant, anxiolytic, & memory enhancement effects.

Phenylpiracetam is a nootropic in the larger family of Racetams. It is a derivative of the parent molecule, and fellow nootropic compound, Piracetam. It differs from Piracetam in the addition of a bulk phenyl grouping off the 4 position on the 2-pyrrolidone base structure. A phenyl grouping is a six-sided cyclic ring consisting of benzene, minus a hydrogen, leaving an open carbon bond available. Phenylpiracetam has very low water solubility but is slightly lipid soluble. Phenylpiracetam is known to act as a psychostimulant, an effect that may be due in part to its chemical resemblance to phenethylamine substances like Adderall.