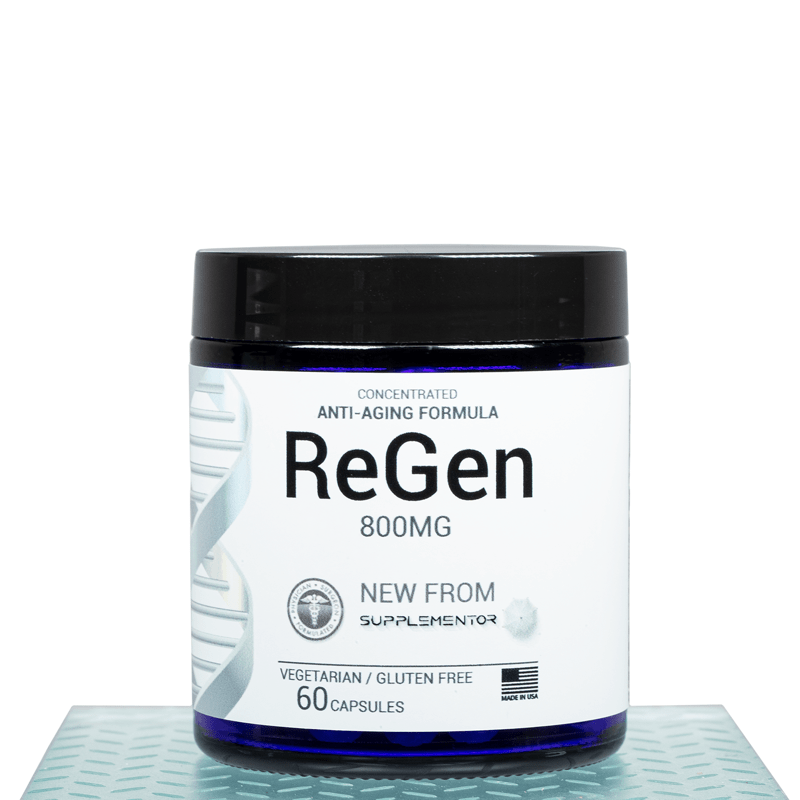 ReGen is formulated to leverage the most recent insights into the Redox Theory of Aging, which holds that aging is an irreversible decline in adaptability due to compromised reduction-oxidation (redox) reactions in cellular systems. In the brain, redox homeostasis is recognized to be involved in all aspects of central nervous system development, function, aging, and disease.

Recent studies have uncovered the diverse nature by which redox reactions and homeostasis contribute to brain physiology, and when dysregulated leads to pathological consequences. Redox reactions transcend what is commonly described as “oxidative stress” and involve distinct mechanisms linked to signaling and metabolism. In contrast to the nonspecific nature of oxidative damage, redox signaling involves specific oxidation/reduction reactions that regulate a wide array of neurological processes such as neurotransmission, homeostasis, and degeneration.

ReGen is the only anti-aging formula that contains NAD+ in addition to its direct precursor, nicotinamide mononucleotide (NMN), and its indirect precusor, nicotinamide riboside (NR). Thus, ReGen is the most comprehensive redox support supplement commercially available. To ensure quality and dosage concentration consistency this product is manufactured and packaged completely in house in our facility in Arizona and is not white labeled or drop-shipped. 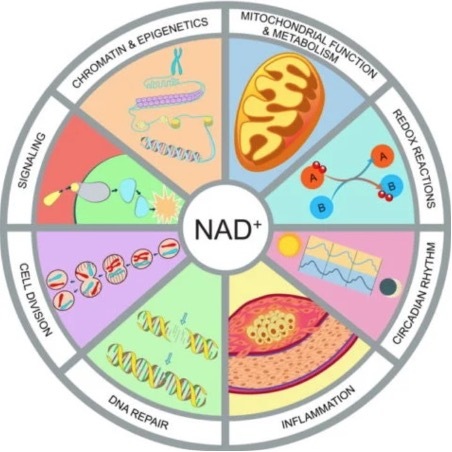 NAD+ controls the cellular redox state of our cells, and it is a required cofactor for key metabolic pathways necessary for anti-aging related repair of tissue. Until very recently, it was believed that NAD+ itself could not be transported into human cells. However, a flurry of recent high-impact research published in journals including Nature, Science Advances and eLife challenges the long-held view that the mitochondrial inner membrane is impermeable to NAD+ and demonstrates the existence of a newly discovered human NAD+ transporter [1]–[4]. Thus, supplementation with NAD+ is justified in light of these very recent, exciting revelations.

NAD+ is a pivotal metabolite involved in cellular bioenergetics, genomic stability, mitochondrial homeostasis, adaptive stress responses, and cell survival. Multiple NAD+-dependent enzymes, including the famed anti-aging Sirtuins, are involved in synaptic plasticity and neuronal stress resistance. During normal aging, lower NAD+ levels are observed in tissues of various organisms including humans. Moreover, NAD+ depletion is observed not only during normal aging, but also in accelerated/premature aging disorders [5], [6]. NAD+ has its own dedicated cellular transporter: SLC25A51.

An alternate route to boosting cellular NAD+ levels is by supplementing with the precursor molecule NMN, which has also shown its therapeutic potential for the treatment of cerebral ischemia (ie. stroke) in preclinical studies. Importantly, in the context of aging, restoration of cellular NAD+ levels by treatment with the NAD+ precursor NMN exerts significant vasoprotective effects, improving endothelium-dependent vasodilation, attenuating oxidative stress, and rescuing age-related changes in gene expression. Most excitingly, NMN supplementation was shown to induce epigenetic rejuvenation [7]. Thus far, only one human study of NMN has been completed, which showed that oral administration of NMN was safe and effectively metabolized in healthy men without causing any significant deleterious effects. Thus, oral administration of NMN has been proven to be feasible, implicating a potential therapeutic strategy to mitigate aging-related disorders in humans [8]. NMN has its own dedicated cellular transporter: SLC128A.

NR is an indirect precursor for NAD+ that is first converted to NMN as an intermediate. Unlike NAD+, NR is highly available in diet, predominantly in dairy products, and it is more readily transported by cells compared to NMN [9], [10]. Biochemically, NR is an NMN molecule that lacks a charged phosphate group. In contrast to NMN, numerous human studies have been completed on NR [11]–[14]. NR has also been prized for its ability to induce adult neurogenesis (ie. brain cell development in adults rather than adolescents), halt the decrease in skin stem cell viability, and increase the lifespan in mice [15], [16]. Moreover, NR has been shown to restore cognition in multiple animal models of Alzheimer’s Disease [17]. NR has its own dedicated cellular transporters: 4QTN and PnuC

The reason for including NAD+, NMN and NR—despite the fact that they all ultimately increase intracellular NAD+ levels—is because each molecule has unique cellular transporters, any of which may be rate-limiting for maintaining maximum NAD+ levels inside cellular mitochondria. Furthermore, the conversion of NMN and NR to NAD+ requires specific enzymes (eg. NRK1-2 and NMNAT1-2) which may be deficient in particular individuals, so taking a multifaceted approach to boosting NAD+ levels is warranted.

This is the salt of the mineral magnesium and the conditional sulfur-containing amino acid taurine, one of the most abundant compounds in the brain, central nervous system, retina, heart, gallbladder, kidneys, pancreas, and muscles. Taurine is required for the normal development of the nervous system, and It plays an important role in many aspects of the function of these organs [18]. It also permits the movement of potassium, sodium, calcium, and magnesium across cell membranes.

Intriguingly, taurine almost meets the basic qualifications to be a bone fide neurotransmitter, which are molecules used by brain cells to communicate with each other. In fact, taurine meets all of the criteria of a neurotransmitter other than no taurine-specific receptors have thus far been characterized. It’s considered a non-essential or conditional amino acid since your liver and brain can synthesize some taurine, but not enough to meet all your needs. Since it’s found almost exclusively in animal products, vegetarians and especially vegans are at risk for taurine deficiency [19], [20]. In addition, seniors are also at risk since taurine levels decline with age [21], [22].

Taurine deficiency is linked to many health conditions including anxiety, depression, epilepsy, and congestive heart failure, while taurine supplementation is thought to improve cognitive function through multiple mechanisms [23]. Overall, there is strong growing evidence that taurine functions as an endogenous regulator of excitability and synaptic activity in the brain [24].

This is a water-soluble and bioavailable version of the widely studied plant-derived flavonol quercetin, which has been shown to a potent antioxidant. Unfortunately, a recent clinical study demonstrated that daily intake of quercetin is merely 16 mg/day [25]. As quercetin is present in fruits and vegetables, high consumption of such foods can increase intake to over 200 mg/day, but it is difficult for most people to reliably consume sufficient fresh fruits and vegetable to reach that goal. Among vegetables, the highest levels of quercetin have been found in onions, asparagus, and red leaf lettuce. Among fruits, apples have the highest quercetin content, perhaps lending credence to the old saying, “An apple a day…”

Studies in primary neurons have shown that quercetin, at low concentrations, antagonizes cell toxicity induced by various oxidants (e.g., hydrogen peroxide) and other neurotoxic molecules present in the brain which act by inducing oxidative stress [26]. Moreover, a recent study showed that bioavailable quercetin (ie. isoquercitrin) was capable of antagonizing unwanted changes in gene expression induced by oxidative agents implicated in Parkinson’s Disease [27]. Unlike other common antioxidants such as ascorbic acid (ie. Vitamin C), it has been suggested that quercetin and/or its metabolites may act by modulating the cell’s own antioxidant defense mechanisms (ie. boosting glutathione levels) [28]. Quercetin and its derivatives have also been shown to counteract oxidative stress-induced cellular damage and prevent neuronal cell death [29], [30].

These ginseng-derived molecules have been actively researched for their ability to boost cognitive performance in healthy adults. Recent clinical research shows that ginseng and its active components have effects against neurodegenerative diseases and stroke [31]–[33]. Preclinical research sheds some light on the potential mechanisms, as ginsenoside supplementation significantly mitigated aging-induced physiological changes, including slowed reduction of body weight, suppression of hair loss, and decrease of pathological arterial wall thickening [34].

Intriguingly, ginsenosides protect against age-related deterioration in testes structure and function, thus potentially extending the period of adult human fertility [35]. One of the leading causes of death among the elderly is cancer, and ginseng metabolites have shown some evidence of chemoprevention, as ginseng gut microbiome metabolites showed significant anti-angiogenic effects on lung, stomach and ovarian cancers [36].

This exotic plant is also known as “plateau ginseng” and contains salidroside, flavonoids, terpenoids, sterols, tannins and many other compounds. Since salidroside is the primary bioactive component of Rhodiolawhich is distributed in all parts of the plant, most research on Rhodiola extract for the treatment of aging-related diseases focuses on salidroside. Research shows that salidroside protects neurons from oxidative stress by activating the crucial antioxidant enzyme thioredoxin (TRX).

Salidroside has been shown to reduce the Alzheimer’s Disease-associated cognitive deficits by reversing hippocampal neuronal loss caused by chronic cerebral hypoperfusion (ie. insufficient blood circulation in the brain) [37]. This same seminal study also showed that salidroside reduced neuronal cell death specifically in the hippocampal CA1 brain area, which is known to be important for autobiographical memories, the type of memories that when lost are most debilitating for Alzheimer’s Disease patients [38]. Rhodiola extract has also been shown to promote neural stem cell proliferation [39].

Intriguingly, the effects of Rhodiola rosea extract on human depression was examined in a Phase III randomized double-blind placebo controlled clinical trial conducted in Europe. In this 6-week study, oral administration of a Rhodiola rosea extract similar to the dose found in ReGen significantly reduced overall depressive symptoms including insomnia and emotional instability, relative to those in the placebo-treated group [40].

*These statements have not been evaluated by the Food and Drug Administration. This product is not intended to diagnose, treat, cure, or prevent any disease.

[14] S. E. Airhart et al., “An open-label, non-randomized study of the pharmacokinetics of the nutritional supplement nicotinamide riboside (NR) and its effects on blood NAD+ levels in healthy volunteers,” PLoS One, 2017.

[27] K. B. Magalingam, A. Radhakrishnan, P. Ramdas, and N. Haleagrahara, “Quercetin Glycosides Induced Neuroprotection by Changes in the Gene Expression in a Cellular Model of Parkinson’s Disease,” J. Mol. Neurosci., 2015.

Save this product for later
Display prices in: USD

These products are not intended to diagnose, treat, cure or prevent any disease. All information presented here is not meant as a substitute for or alternative to information from health care practitioners. Please consult your health care professional about potential interactions or other possible complications before using any product.