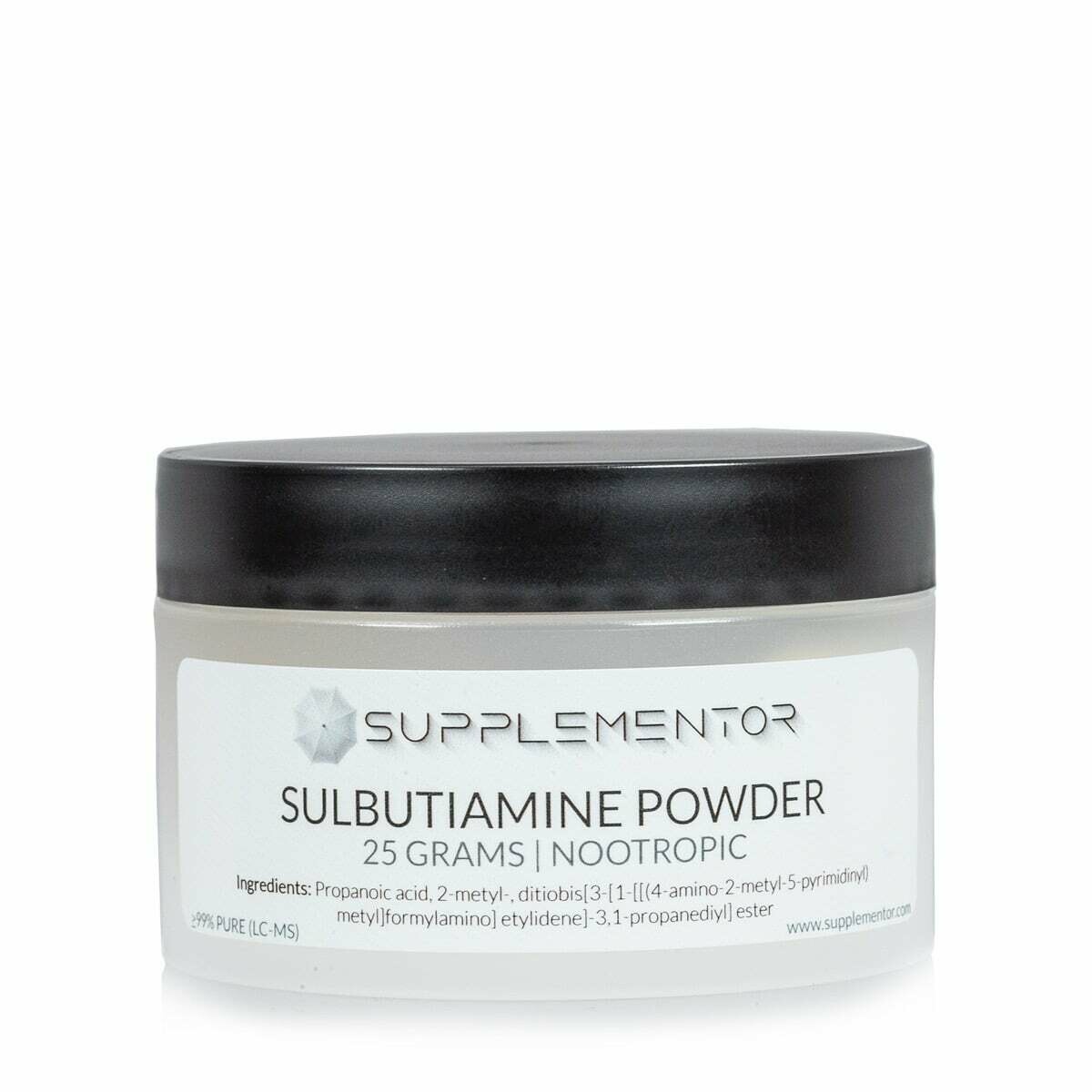 Sulbutiamine is a highly fat-soluble form of vitamin B1 which is used clinically for the treatment and prevention of asthenia (ie. unexplained fatigue). Since it is fat-soluble, it can more easily cross the blood-brain barrier, which is not permissive to regular vitamin B1 (thiamine). Crossing the blood-brain barrier is crucial for sulbutiamine to exert neuroprotective effects which are hypothesized to be at the root of its ability to improve basal energy levels. People who suffer from low basal energy metabolism often exhibit low motivation due to the high metabolic needs of the brain during focused effort.

Sulbutiamine was developed in Japan in the mid-60's as therapeutic drug. Since then, a variety of distinct indications have been proposed. For instance, there is evidence that sulbutiamine combats fatigue, functions as a nootropic, and exerts antioxidant effects. As a result, sulbutiamine has been utilized in sports nutrition as a dietary supplement (although it may provide an unfair advantage). Moreover, this molecule has been proposed as a possible treatment for some fungal infections and even for certain types of cancer. Despite these potential indications, sulbutiamine is still relatively mysterious in medical research. Regardless, there is obviously enormous potential for sulbutiamine use beyond treating low thiamine. Recently, new mechanisms of action have been found, bolstering the hope for its success in treating a variety of health conditions.

5. Reduces fatigue in patients with MS.

Physical weakness is a common symptom after an infection or illness (ie. fever, flu, etc). Confronted with this problem, physicians face a common complaint from patients: the infection or illness has subsided but patients are still complaining about disabling weakness preventing their normal activity or a decrease in motivation to undertake daily tasks. In 1998, a group of researchers in France hypothesized that sulbutiamine could fight post-infection fatigue, so they recruited 326 patients who all complained of general physical weakness after overcoming a fever episode (in relation to influenza, bronchitis, nasopharyngitis, or gastroenteritis).

Among the 326 patients actually included, 106 had treatment with 400 mg per day, 11 with 600 mg per day and 109 were given a placebo. The average age of the patients included was 42 years (18 - 87 years old). The proportion of men and women in the study population was 36% men and 64% women. The length of recovery fatigue varied from 27 days to 1 year. No stress factors or acute psychosocial disorders were detected in 73% of patients and no co-morbid anxiety disorders were detected. Overall, these patients represented a broad cross-section of society and were generally healthy. This is a crucial point when extrapolating observed benefits in a study to the general population.

After 7 days of treatment, there was a reduction in fatigue scores in the group that took 600 mg per day. Those who were taking only 400 mg per day showed a slight decrease that was not statistically significant

Fatigue is the most frequent and often debilitating symptom for patients with multiple sclerosis (MS). There are no available effective therapies for fatigue associated with MS, and it is unclear whether a successful therapy of MS leads to clinical improvement. Sulbutiamine is a lipophilic compound that crosses the blood–brain barrier more readily than thiamine and increases the levels of thiamine and thiamine phosphate esters in the brain. Although several clinical trials have demonstrated the beneficial effects of sulbutiamine in patients with general fatigue, there have been no reports yet on the effects of sulbutiamine on fatigue in patients with MS.

Multiple sclerosis (MS) is a chronic and inflammatory neurodegenerative disease which afflicts more than 2 million people in the world. It causes a wide range of symptoms, of which fatigue is one of the most frequent and disabling. Fatigue may affect up to 95% of patients living with MS and has a major impact on quality of life. Moreover, it is shown that fatigue in MS persists over time once it appears. Most of the patients with MS report that their fatigue is severe. Clinically, it presents as exhaustion, loss of energy, daytime somnolence, or exacerbation of symptoms. Fatigue in MS can be differentiated from fatigue in normal individuals because it worsens with heat, interferes with physical functioning and performance, prevents sustained physical activity, comes on easily and causes frequent problems.

The mechanism of fatigue in MS is still unknown and could be due to lesions of cortical or subcortical pathways involving motor cortex and basal ganglia, autonomic dysfunction, hypothalamic pituitary adrenal axis dysregulation and/or endocrine disturbances. In the light of this mystery, the development of effective therapies for fatigue relief is an important goal for neurologists. Unfortunately, there are no available effective therapies for fatigue associated with MS. Several drug treatments have been evaluated for fatigue in patients with MS but none found to be effective. Sulbutiamine is a synthetic compound composed of two thiamine (vitamin B1) molecules fixed with a disulfide bond which provides its fat-soluble properties. Accordingly, it crosses the blood–brain barrier more readily than thiamine and increases the levels of thiamine and thiamine metabolites in the brain. Sulbutiamine is postulated to be effective for the treatment of asthenia and chronic fatigue. The aim of this retrospective study was to evaluate the effect of sulbutiamine on the severity of fatigue in patients with MS.

A total of 234 patients with MS and fatigue were screened for the study. However, of those screened, 209 (90%) did not meet the fatigue eligibility criteria. In total 26 patients aged 18-57 with MS (18 females and 8 males) were eligible for the study, and they received 400 mg of sulbutiamine per day for 2 months. The researchers found that 23 out of 26 patients had improved overall fatigue scores over the study period whereas only 1 patient remained the same and two worsened. In total, half of the patients in this study ranked as either ‘markedly good responder’ or ‘good responder’.

A recent proposal about fatigue in MS is the imbalance of dopamine in the brain. There is an increasing number of structural and functional neuroimaging studies supporting this hypothesis. Moreover, methylphenidate (Ritalin), a potent dopamine reuptake inhibitor, is shown to reduce fatigue symptoms in patients with traumatic brain injury. On the other hand, sulbutiamine is shown to have regulatory effects on dopaminergic receptors in the rat brain. Thus, it is possible that sulbutiamine alleviated fatigue via its regulatory effect on dopamine metabolism in these patients who responded well.

Sulbutiamine is a drug currently used against somatic inhibition (ie. preoccupied with excessive thoughts relating to physical symptoms) and decreased physical activity. For example, it shortens the duration of psycho-behavioral inhibition (ie. motivation to perform activities) occurring during major depression. It is also being actively studied for improvement of the episodic memory in patients with psychomotor issues. Learning and memory deficits have been reported following thiamine deprivation. Past experiments showed that a chronic treatment with large doses of sulbutiamine improved the acquisition of an “operant task”, which is when a learned behavior is rewarded or punished (ie. a child gets a treat for opening a box).

In a case study, researchers showed that daily consumption of sulbutiamine induced subtle but highly significant behavioral and neurochemical benefits. Behavioral analysis demonstrates that sulbutiamine treatment improves 24 hour delayed retention of a learned behavior (in this case, a lever push). This improvement seems to be specific of long-term memory formation since no effects were observed when learning was uninterrupted.Additional behavioral testing reported elsewhere showed that the treatment had no effect on either motivation for food, locomotor and exploratory activity (hole-board test) or emotionality (open-field). The same observations remain valid for subjects treated with placebo, which did not exhibit any behavioral differences to untreated subjects.

It is likely that the memory improvements induced by sulbutiamine are related to choline activity in the brain.Choline is an essential nutrient that is a precursor for the molecules that make up cellular membranes that protect neurons and their connections, which is the basis for long-term memory. Abundant research shows that thiamine deficiency—which can be cured with sulbutiamine supplementation—is highly correlated to problems with enzymes that break down choline metabolites.

One of the “silent signs” of memory disorders is a deficiency of thiamine, which can also occur despite adequate dietary intake if thiamine absorption is impaired. In fact, one of the consequences of chronic alcohol consumption is impaired thiamine absorption, in which case sulbutiamine supplementation is especially warranted. The relationship between alcohol use and memory impairment can be explained in part by lack of sufficient thiamine levels in brain tissue.

Sulbutiamine is a lipophilic form of the essential nutrient thiamine, otherwise known as vitamin B1. There is abundant evidence that sulbutiamine can reduce fatigue in various clinical contexts and circumstances. Although the evidence for improvement in memory is still preclinical, there is sufficient data to support future clinical studies to quantify the memory benefits, and determine which populations are most likely to enjoy cognitive improvements from sulbutiamine supplementation.

*These statements have not been evaluated by the Food and Drug Administration. This product is not intended to diagnose, treat, cure or prevent any diseases. Umbrella Labs remains neutral to third-party intellectual property considerations arising from the non-approved use of any of its products.

Save this product for later
Display prices in: USD

These products are not intended to diagnose, treat, cure or prevent any disease. All information presented here is not meant as a substitute for or alternative to information from health care practitioners. Please consult your health care professional about potential interactions or other possible complications before using any product.